What would Nietzsche do?  I know.  You are once again wondering what the hay this philosophizing goat is talking about.  But I can assure, philosophizing is just what I am doing.  Aren't I supposed to be?  Well, here's the thing.  Friederich Nietszche was a German philosopher who lived from 1844 to 1900.  Well, never mind that his philosophy might have been the product of a diseased mind, he still had some rather profound things to say.

So what exactly does this have to do with a goat?  Nothing.  Really.  Absolutely nothing.  What it does have to do with, however, is the Goatmother.  So here is the deal, but before I tell you this, you need to realize that all things contain both good and bad.  Just look at Peanut. (the goat and not the nut, since the nut is obviously an exception to this rule).  Perfect example.  Anyway, back to the Goatmother.  On May 1st, the Goatmother's port is coming out.  At least it is scheduled to.  The Goatfather says that this is so if anything goes wrong, they can yell 'May Day! May Day!!!!', but then we might find it prudent to consider the source in this case.

Ordinarily this event would be viewed with a great deal of joy, and indeed it is.  After all, if the doctors feel the port can come out, it implies they feel confident they aren't going to need it again any time soon.  That is a real morale booster for sure.  However, there is a down side.  Remember?  I told you.  Both good and bad.  So what could possibly be bad?  Well, do you remember back when the Goatmother first got the port?  In case you have forgotten what resulted from that event, you can refresh your memory here.  Yes, the gaining of Super Powers and the birth of an alter ego.  Butter Bean, the 4th Power Puff Girl.

So, here's the further thing.  If the Goatmother loses the port, does it follow that she loses her Super Powers?  Does Butter Bean cease to exist?  And this is where Friederich Nietzsche comes in.  So let's examine a few of the things Mr. N had to say.  First of all, he said, "  All things are subject to interpretation.  Whichever interpretation prevails at a given time is a function of power and not truth."  Hokay.  There's that *power* word.  So if the Goatmother has the power in the first place, then the truth is she can keep it, right?  Hmmm ...

What about this:  "All credibility, all good conscience, all evidence of the truth come only from the senses."  There's that truth word again.  And since we know that power is the winner here, since he said that already, and we know the Goatmother doesn't have any sense, looks like she gets to keep the power again.  Hey, I'm beginning to like this.

Okay, now, Nietzsche also said, " The irrationality of a thing is no argument against its existence, rather a condition of it."  Since it is entirely irrational that the Goatmother should have possessed Super Powers in the first place, that should serve to prove she was actually supposed to have them.  And why would someone lose something they were actually meant to have?  Were destined to have?  That wouldn't make any sense, would it?  Of course we have already established that the Goatmother has no sense, but still ...

Oh, well, what do you think?  Does  the Goatmother lose her Super Powers or not?  One of her friends told her, "No.  They are yours to keep in perpetuity."  Who knows?  What exactly would Nietzsche do?  Probably go sit on his stump and think about it a lot.  And be grumpy.

At any rate, there is no question that the whole thing has been good in many ways.  The Goatmother is the better person for it all - with or without Super Powers.  How do I know?  Because Nietzsche also said this:  "That which does not kill us makes us stronger."  Got that right.  Word, Fred.
Pondered and Presented by Marigold at 12:20 PM 16 comments:

Hey, ho.  I know.  I'm behind again.  I don't think it is going to get better anytime soon, though, so we'll just have to deal.  It is the Goatmother's fault.  She got so far behind and it rubbed off on everybody else.  Oy.

Anyway, I am writing this post as irrefutable proof.   Of what, you ask?  Well, let's begin at the beginning, shall we?  Those of you who are football fans may remember the ultimate in Super Bowl commercials that was shown this year - the Dorito-loving goat.  Now if you don't remember because you have slept since then, or if you never saw it in the first place, you can do so HERE.

So, this begs the question...  Well, actually two questions.  First, what the hay is so darned special about some cheddar-cheese laden bit of triangular corn?  And second, just what kind of goat would actually go so head-over-hooves for them?  Inquiring minds certainly wanted to know around here, so we decided to conduct an experiment.  I, for one, could not fathom that such a *treat* could actually be that good, and I knew, without a doubt, that no self-respecting, Peanut-loving mini-Nubian would ever be enticed to the dark side.

Proof is in the pudding as they say, or in this case, the munchy morsel.  Not only that, but a picture is worth a thousand words.  Can't go wrong then.  Here's how it went: 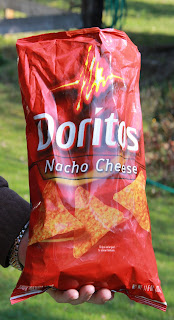 Myself, being the most intelligent and discerning subject, is offered the first taste. 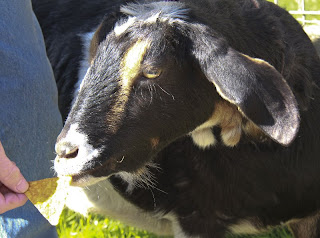 Obviously my keen palate serves me well and the offering is rightly refused. Certainly it is to be eyed with great suspicion. 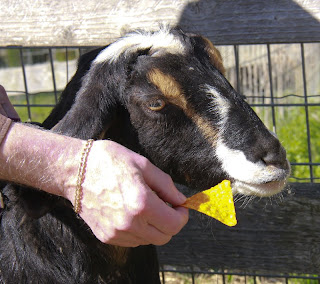 Next, the morsel is offered to Ella.  Now here is a real test since Ella has no palate and will eat virtually anything.  She eyes it innocently. 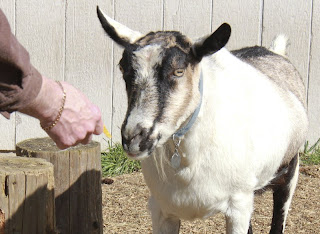 Whoa!  Proof positive that even the gourmand, as opposed to the true gourmet, can't stomach these things. 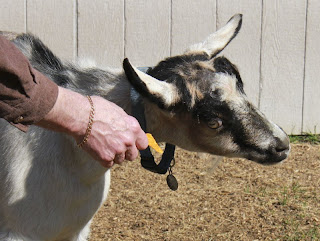 Next, the item in question is offered to the fainting goat.  Luckily he does not faint, but you may observe that even he is not inclined to eat it.  I might add, here, that Boo was not offered the tidbit.  This was decided before the experiment began since her Nubianess would prevent her from remembering what exactly she was trying to accomplish.  Or even that she might have tried to put something in her mouth in the first place, or that it was not, in actuality, something like, say, a hat.  It would simply be a moot point. 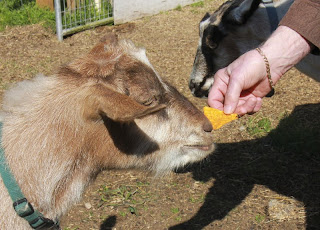 At this point, the crispy critter is offered to Peanut.  Oy.  As you can see, he actually takes it, for goats' sake! 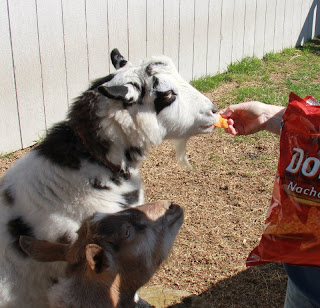 Not only does he take that one, but he takes another, and another and yet ANOTHER!  Oh, the shame. 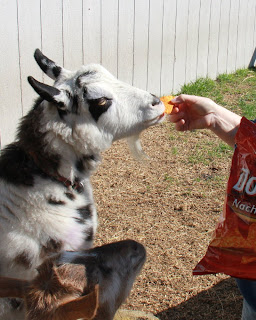 At length, he is seen standing at the gate literally begging for more.  Can you see the orange tongue and the tell-tale remnant hanging out the side of his mouth?  This is embarrassing.  After all, he is my nephew.  Can you see the look of dismay on my face?  Begging is so beneath a goat's dignity. 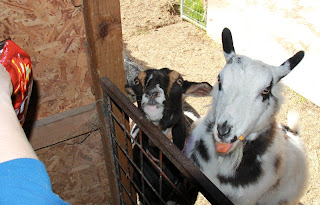 At any rate, ir-re-fut-a-ble proof!  These things are NOT all they are cracked up to be.  What were those commercial people thinking?  I can only say it is a product of the almighty buck (that would be the dollar kind and not the goat kind, thank you very much.  Although, come to think of it ...  Nope.  Not goin' there.)   And, it also answers the second question.  What kind of goat was that in the commercial?  What kind of goat could go so hog ... I mean, goat-wild over such an inferior comestible?  Obviously a Nigerian.

Which leaves us with a question even Watson is left considering.  Just what IS the fascination? 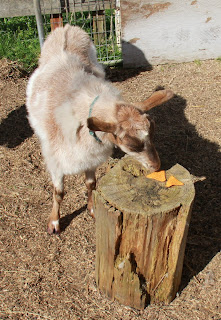 Pondered and Presented by Marigold at 3:16 PM 22 comments: