Hallooo!  It is I, Watson.  You haven't forgotten me, have you?  Well, come to think of it, maybe you never really knew me?  I am Watson.  I am a fainting goat and I was Marigold's right hand goat ever since I came to live in Washington - and that was ever so long, and so many Peanuts ago.  I was born in Boring, OR (Really.  There is such a place. Seriously. Look it up.), but that doesn't have any bearing on my personality.  Whatsoever.  I don't think so anyway.

Now you are probably wondering why I am even writing anything at all on this blog. After all, Marigold has gone on to greener pastures (so to speak) and this was her vehicle of self-expression for something on the order of ten years.  But the truth of the matter is, I felt compelled to write.  And when I say compelled, I mean that in the strictest sense of the word.  In fact, impelled might be a better term.
But perhaps I'm getting a bit ahead of myself.  Allow me to impart to you a tale of the most strange and extraordinary kind.

Being a fainting goat, I am prone to well, fainting. I've gotten better over the years.  When I was a kid, I used to faint if a bird flew over.  Now I pretty much just freeze in the hindquarters.  Still, once in a great while, something (like an Alpine) catches me off guard and over I go.  What can I say?  It goes with the job.  So shortly after Marigold passed from this world, I was out grazing when Ella saw her chance and came at me.  Being an outright onslaught, I naturally lost all semblance of control in my haste to get the hay out of the way.  And that is when my life changed.  Utterly and oh so completely.

After the blitzkrieg, I stirred and began to rise.  Once on my feet, and  realizing Ella had thankfully become distracted by something else, I put my head down (with a wary eye) and began to graze again.

Watson!  Don't be an idiot.  What mind?  No, it really  is ME.  I just didn't feel like I could completely abandon the world to a life bereft of my sincere, wise and witty repartee.  It just wouldn't be right.   Plus I always meant to stop eating and start writing again.  Got kind of lax there toward the end.  Then it was too late. Oy. Hay, though, multi-tasking is THE THING over here.

OY.
You got the 'oy' part right anyway.

And this is how it began - and how it continues.  Every day.  All day. Day in and day out I hear 'Pssstttt .... Watson!'  My life is no longer my own and I have been called to a higher purpose.  I guess I've become a Medium ... or at least a quasi-large.  For Goats' Sake!  I'm a friggin' Channel!  Who knew a simple-mind..., uh, simple goat from Boring, OR had it in him to become a true and pure avenue to a higher plane?  Never say never, I always say.  And as for Marigold, well ...

Pondered and Presented by Marigold at 3:54 PM 11 comments:

There Is Never Really An End ... 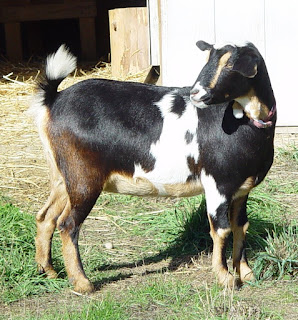 It is with great sadness that this will be the last entry of Marigold made by me, Watson, her long-time confidant and partner in solving the mysteries of life.  She was my wise and true friend for almost 13 years.  She shared her philosophy with us all and made us laugh in the process.  If only the world could be as that seen through her eyes ... taking things in stride, never getting angry over little things, persevering in the face of adversity, always finding the silver lining, and above all accepting and loving others even though they are different than you - even Alpines.  Going on without her will be difficult, but she will never, ever, ever be forgotten.  Rest in peace my dear friend...and say hello to Boo and Cookie for us, please.

Pondered and Presented by Marigold at 10:29 AM 13 comments:

Perhaps You Are Wondering ...

Perhaps you are wondering if I am still alive.  I am.  Perhaps I shall stop eating long enough to bring you up to date.  Hay!  It could happen. :)

Yours in Peanuts,
Marigold
Pondered and Presented by Marigold at 7:00 PM 5 comments: