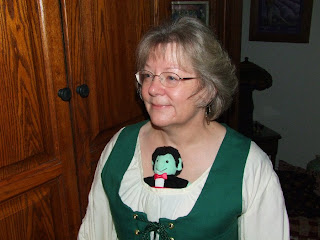 Okay, my friends, look quick.  The Goatmother simply hates to have her picture taken and this may well be the only one you will ever see.  It is a Halloween miracle.  What?  You only thought they happened at Christmas?

Anyway, you may recall the Goatmother simply loves Halloween.  So, it all began last night with a dinner of spider eggs and a lovely eyeball casserole.  Oh.  Yu - um? 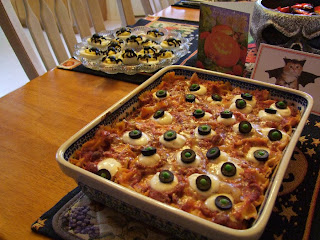 Then this morning, out popped the Goatmother with the Little UnDead and the Goatfather in tow, on their way to Sweet Laurette's (Hay!  Check out her website.) in Port Townsend.  Not only does Sweet Laurette's have the most wonderful food, but it is owned and staffed by the most awesome people.  Anyway, patrons were invited to come dressed in costume during brunch yesterday and today, so, you guessed it, this is where our little party was bound.  The Goatmother had donned an Irish Renaissance gown (the top of which can be seen in the one and only probably ever picture of her above) for the occasion.

Here you see The Paltry Putrid One sitting in one of the chairs outside Sweet Laurette's.  I do not understand how it is that someone so, well, green, gets to go to all these places and I don't. 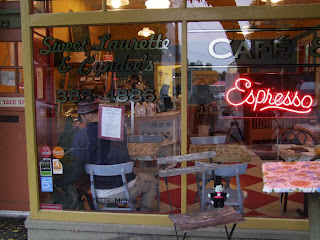 Anyway, once inside, the group was met by some of the awesome staff people. 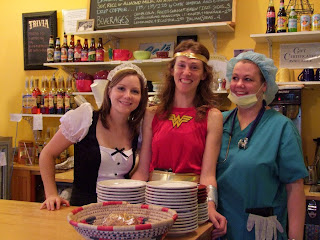 Wouldn't you love to be greeted and served by a French maid, Wonder Woman and a Doctor?  Or is she a nurse?  At any rate, in this next photo you can see a 'normally' dressed young lady on the right. She was supposed to be Willie Nelson, but I guess we missed out on that because her alter ego apparently only comes out on Saturdays. No matter.  She stirs up a really mean cup of brew, that one, not to mention being an exceptional person. 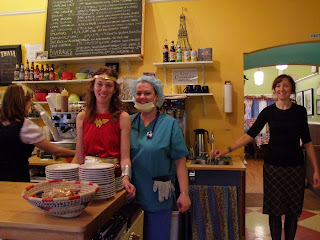 Once seated, The Inconsiderable UnInert insisted on having his picture taken again.  Hardly anybody noticed.  Hardly... 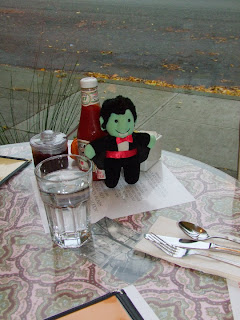 I really think he was trying to get Laurette's cute little painter to come over and brush some of the crumbs off his coat. 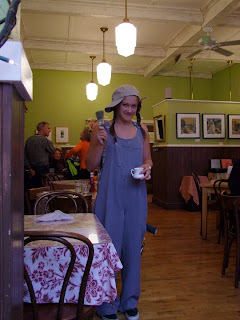 Now I wouldn't want you to think that the Goatfather refused to enter into the spirit of things because he certainly did.  Sort of. 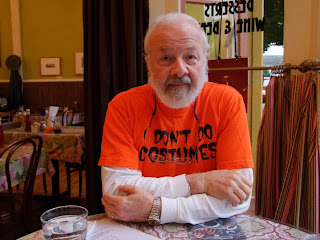 Even the Zombie guy across the street seemed envious.  Well, maybe he was envious.  Really it was kind of hard to tell.  Maybe he was just scoping out the place for brains.  Ewwwwww.  Don't be concerned, though.  Obviously none of our little party has any.  Oh, oops.  Did I just say that? 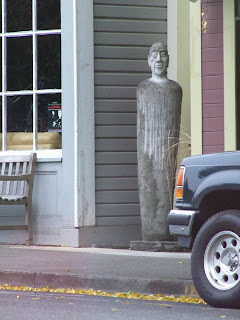 All in all, everyone had a great time.  So many places just don't celebrate Halloween anymore.  How cool is it that there are still a few around who do?  Gotta' love Port Townsend! 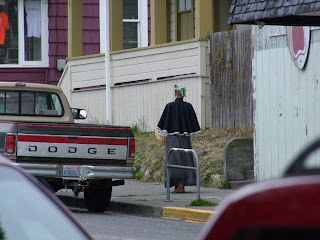 Now if I can just get someone to take me trick or treating.
Pondered and Presented by Marigold at 1:22 PM

The goatmother is absolutely stunning in her Irish rennaissance gown (of which I am quite envious) and should have her picture taken more often. The curmudgeon...errr...goatfather looks good too. We hope you get extra peanuts for the spooky celebration.

And WHY oh WHY does the goatmother dislike having her picture taken? Hmmm? She is one beautiful, hot babe and destined to be a BABE-O-RAMA-GRANDMA. Get with the program. Lose the shy routine. Shake your money makers for all the world to see. You've got it going on! Use it or lose it. Even the Undead looks delighted to be up close and personal. I tell you, the goatfather better be on his toes...better yet, on his knees. Does he know what he's got?
And what is with his T-shirt? What tribe does he belong to? The uncelebratory long-faced men? Sheesh! Wake up people.

Dear Claire and J,
The goatmother said to tell you thank you for your kind comments. I told her she looked okay too. I got extra Peanuts. :)

I love the Goatmother in her lovely dress! We love Halloween around here too.

Dear Millie,
The Goatmother says 'awww, shucks. Thanks.' Yay for another Halloween lover. We goats know how to do Holidays. :)

Oh look! I *finally*, after many long years, get to see a picture of the infamous goatmother! She is more beautiful than I had pictured in my head! And what a lovely costume!
Ahhh, Halloween, it brings out all sorts of surprises, doesn't it? To see the goatfather, too, well, this is just icing on the proverbial cake for me! :-)

Dear Danni,
The Goatmother is all red-faced. But she thanks you for your comment!