Yesterday was the 1st day of 2012.  Can you believe it?  Anyway, the Goatmother and Goatfather decided to start the new year out right.  Enter what you see below ... 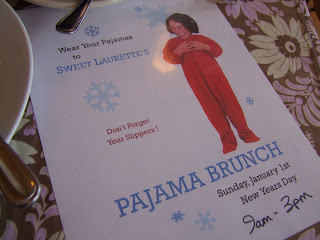 You may remember (or maybe you don't) that the Goatmother, Goatfather, and that sickly Little green UnDead visited their favorite restaurant in Port Townsend last Halloween - all dressed up.  Well, the Goatmother was dressed up.  The Goatfather was *sort* of dressed up.  In case you have slept since then, you can refresh your memory here.  Anyway, as you can see above, On New Year's day, Sweet Laurette's hosted their annual Pajama Brunch.  Come in your jammies and don't forget your slippers.  So, naturally, the Goatmother and Goatfather thought this would be the perfect way to start off a new year.  Make a complete fool of yourself and be sure to have lots of witnesses.  You really have to wonder about some folks.

So, New Year's day dawned not so bright, and the Goatmother trotted out to the barn earlier than normal.  We knew something was up right away when she said, "Guess what?", because if you know the Goatmother, you know that she is rarely in any shape to mutter anything at that time of the morning, let alone ask a question. We all came to immediate attention because an alert Goatmother at daybreak has to be some kind of omen.  "I'm going to breakfast in my pajamas!!", she announced.  Hokaaay ...  So shortly after returning to the house, this is how she looked: 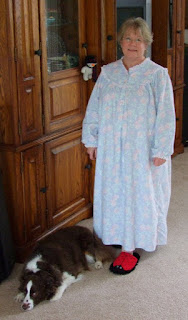 As you can see, even the Mighty Quinn looks a bit embarrassed.  I mean just look at those ladybug slippers. (Excuse me while I interject a question here to my friends Mimi and Darla ... Do you recognize the material in that nightgown?)  At any rate, you can tell just how contrived this all was because I'm here to tell you the Goatmother's hair NEVER looks like that when she gets up.

Anyway, not to be outdone, the Goatfather actually entered into the spirit of things.  Maybe it was just a wee bit to the extreme, but I'll let you be the judge.  Here is a shot of him getting into the truck in uptown Port Townsend: 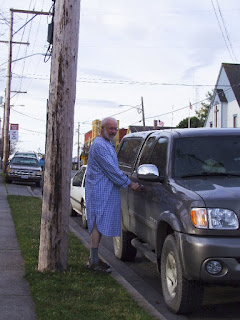 Legs.  Who knew he had any?

Now here is the really unfortunate part of this whole affair.  As the Goatmother and Goatfather walked into the restaurant and were waiting to be seated, these lovely ladies (also in their pajamas) ... 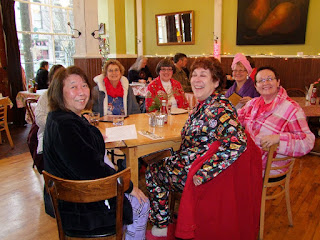 ... caught sight of the Goatfather and broke into applause.  Must've been the legs, but there will certainly be no living with him now.  I suppose it does need to be said that he was the only male present with enough nerve to come in his PJ's.

Soon the Goatmother and Goatfather were seated, and owner and Chef extraordinaire, Laurette, (seen in the pajamas with the bright green top, below), set about walking through the tables handing out freshly made Beignets.  (Why, oh why, do I not wear pajamas?) 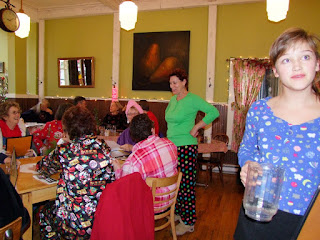 After a wonderful brunch, the Goatmother and Goatfather walked out and down the street, only to turn and find another adventurous PJ-clad soul hollering, "Wait!  I want to take your picture!"  Since turn about is fair play : 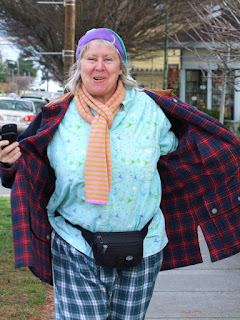 Hay!  She had little New Year's champagne glasses all over her PJ top!

I've said it before, and I'll say it again.  You just gotta' love Port Townsend. 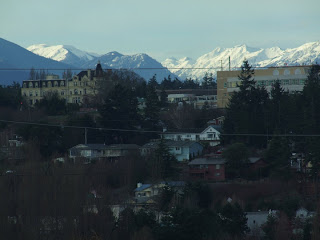 I hope your new year is off to an adventurous start.  But  I gotta' tell you, if this is the beginning, what in the world is the rest of the year going to be like?  Oy.
Pondered and Presented by Marigold at 2:58 PM

Dear Marigold,
It would have been a better party if the invites had said, "wear PJs and bring goats." That would have been much livelier, wouldn't it?
Happy New Year, from Pip and Caper (who had a very boring New Years here, even though the weather is so warm that there's still green stuff in the pasture, so we can't complain too much. Oh, actually, yes we can.)

:) My dear husband was born in Pt Townsend and his dad, grandparents and a majority of his aunts and uncles still live there. I think their actual address is Irondale, but I'm not sure.

That sounds like a wonderful way to start the year off! My poor goats see me in my PJ's alot as I will just throw on my jacket over pjs and head out to feed them. As long as they get their feed they don't seem too embarrassed by how I look. LOL

Thanks for the wonderful laugh out loud! :)

And, woo-hoo! The Goatfather has some serious nice legs going on there!

Der Terry,
Yes, I do think goats should have been invited. What WERE they thinking?
Dear HammersArk,
Yes! We know where Irondale is!
Dear Peggy,
Most goats aren't very fashion conscious, except for Darla that lives with MiMi. :)
Dear MiMi,
And, yes, you did recognize that material, didn't you? ::)

What a couple of adventurers your humans are. We started out year with the human mixing the boys and girls~and Bud kicked the human in the nose!

Dear Millie,
I think Bud must be part Alpine. They tend to do that sort of thing. Punks. Alpines are punks.

Kudos to the Goatfather! It takes a real man to wear a nightshirt, calf socks, and slippers to breakfast in public. The Goatmother's nightdress is very pretty indeed. They both deserved all the beignets they could eat.

Dear Mrs. Micawber,
The Goatparents say 'Thank you!' As for me, I think the Goatfather ought to be glad it wasn't any colder than it was.

The goatmother looks radiant as always. How does she manage it? I would have loved to attend in my penguin-print fleece jammies with footies. I am a strong proponent of jammies at all times. Even for goats. xox

Ohhhh "Marigold," if I didn't love your Goatmother and Goatfather before, I do now!!!!

And hooray for Goatfather! He had the GUTS to show up in his NIGHT SHIRT. The equivalent of Goatmother's flannel Nightie!!

I'll share a secret with you "Dear Marigold," if you can keep a secret???? "Auntie" and "Uncle A." wear the exact same things to bed! We may be *Olden* but we aren't dumb. -grin-

"I am not young enough to know everything."
- Oscar Wildej

Dear Claire,
Footie PJ's! Yes! You should have been there. Although I have to say a nice goat print would be better than penguins.

Dear Auntie,
OF COURSE, I can keep a secret! I am a goat. Who do I have to tell anyway? :)

I love this idea! It would be perfect for the mornings that I do the milking in my PJs. Then I could just head into town for breakfast. Awesome1
Stevie @ ruffledfeathersandspilledmilk.com

oh what fun! i got such a cuckle out of this post! hellman's just introduced some new flavored mayo's and i used the garlic herb one on the sammies!

Dear Stevie,
You are right. Although, don't you really think the goats ought to have PJ's too, and be allowed to go along?

Dear Jaz,
We aim to please. :) Thank you for the mayo info!

Please tell Fireball he is most brave to wear those duds in public! His fans can't stop laughing. The goatmother knows how to dress her man...unless he picked the outfit himself?

Dear Laughing J,
What do you mean did the Goatmother pick out the Goatfather's jammies? I picked them out. Don't they look goatly?

I think the laughter you gifted me on this one is going to last all year! Whenever I get down from now on, I'm going to think about Goatfather on New Year's Day!!!

Dear Snowcatcher,
I am so glad you enjoyed the picture. Honestly, I think laughter is about the best gift one can give, or receive for that matter. Hmmm... I think I'm going to have to go out on my stump and ponder that a bit.

Oh, Marigold. Such a good story, so well told. Goatmother and Goatfather did look adorable, didn't they!

The last picture - unbelievable. What a gorgeous place to live.

Dear Ginnie,
Shhhhh! Do not tell the Goatmother and the Goatfather they were adorable. We will NEVER hear the end of it. Oy.
As for the mountains, I am thankful every single day of my life to be surrounded by such beauty.