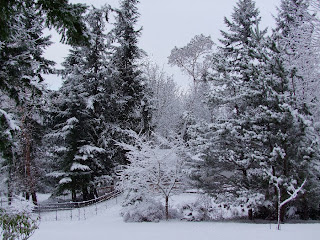 Yes, I am in there.  Somewhere.  I am NOT, however, coming out to prove it.  This was *supposed* to be 'one-half inch possible', but ever since those Woolly Boogers quit NOAA, it is my belief that NOAA has been reduced to looking out the window.  Obviously they had not looked out the window in awhile.

Nonetheless, though we goats are not enamored with the snow, there are those who are. 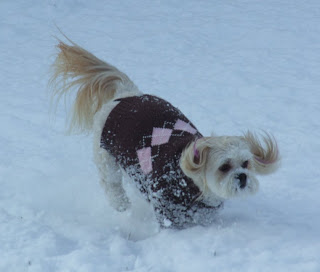 Which, after deciding that she could actually move with that brown thing on her body, resulted in many of these: 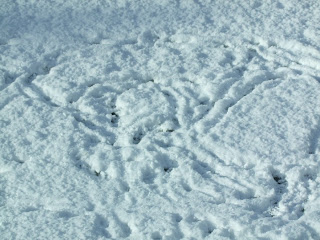 After awhile the sun came out - after all, this is Sequim - and things looked pretty nice.  (And I say *looked* because you don't think I was actually going to step outside to get a better look, do you?) 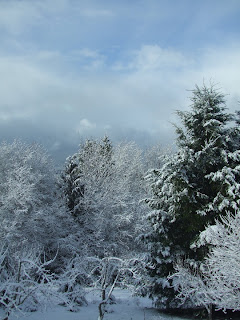 This morning when the Goatmother came out to the barn, we only had a trace of the white stuff on the ground.  The Goatmother decided it was a good time to trim Ella's hooves.  Only the Goatmother would decide such a thing.  I mean, there was only a trace of snow out there, so of course it was a perfect time.  Oy.  The boys were unceremoniously thrown out of the barn so as not to interfere.  The project took a bit longer than expected because for once, Ella, usually Miss Goody-Two-Hooves about getting her feet trimmed, was NOT, it would seem,  in a cooperative mood.  By the time the Goatmother was finished, she looked up to see that it was snowing.  Heavily.  The boys now sported a thick layer of snowy insulation. 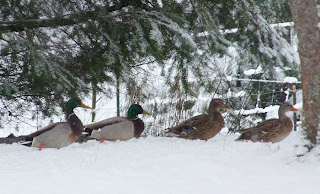 Pondered and Presented by Marigold at 1:32 PM

Oh, yes! Blame it on the ducks. I must say, the snow does look pretty when it is at your farm instead of mine.

Uh oh...those ducks are beginning to reek havoc in their own twisted way are they???? Be careful. They will do anything to distract you to get to the Snojars. I fully expect to hear about tornadoes, floods, scattered Fireball bits and chunks, and reports of civil uprisings in your neck of the woods. Those ducks are T-R-O-U-B-L-E!

On the other foot, Cabra is SO adorable! :)

Dear J,
I am glad you are no longer tealess. And you are absolutely correct about the ducks. With a capital 'T', that rhymes with 'P' that stands for Pool - of destruction.

When in doubt, always blame the ducks. ("Blame the Ducks" would make a nifty name for a band.)

Your snow looks lovely. So nice and January-like, isn't it?

Do you get a snazzy sweater too, or is that only for dogs? ("Sweaters for Dogs" - band or charity? You make the call.)

Since the dog gets feathers when groomed, did Ella by any chance get hoof polish with her pedicure?

Dear Mrs. Micawber,
No sweater for me - yet. I keep after the Goatmother to crochet me one, but it hasn't happened - yet.

Yesterday Ella was having one of her snits. She would not have held still for polish, even if any had been offered. Me. I'm a purist. Polish would be so bourgeois.

-giggles- Decisions, decisions. Poor Goatmother, she thought she had a good idea there. It seemed like a good idea. It did, it did, it did. Betcha' that's what she'd tell you, Dear Marigold.

Oh so pretty pics though. Snow does make a pretty picture. But I'm with you, on liking to seeeeeeeeeee it from inside. -grin-

'Course, I am "olden" so I get to have that view. However, you are NOT "olden." Mmmmmmm... Dear Marigold, me-thinks you need a better excuse. -chuckle-

"The act of putting pen to paper encourages pause for thought,
this in turn makes us think more deeply about life,
which helps us regain our equilibrium."
~N. Platt

Well here's another thing to blame on that! Forgetfullness.

I meant to agree with your comment in my blog.... About how we need to counter all the bad news which is available, on tv and in print. Some way.

I look on "Pretty Blog Land" as a haven, for just that. A place where we can concentrate on fun, warm, cozy, etc., etc., etc. And re-charge our batteries, for when we have to face-the-world again.

Thank you for being such a fun place in Pretty Blog Land... For me to do just that.

"The act of putting pen to paper encourages pause for thought,
this in turn makes us think more deeply about life,
which helps us regain our equilibrium."
~N. Platt

What? Is it supposed to snow?

Dear Auntie,
The Goatmother is old. She forgets a lot. Come to think of it, I'm no spring chicken anymore myself. What am I saying? I'm no chicken. Oy. See what having to deal with Ella on a daily basis has done to me?

Dear Farmer,
Go back to sleep.