What?!  Thursday Words of Wisdom?  I do have an excuse: 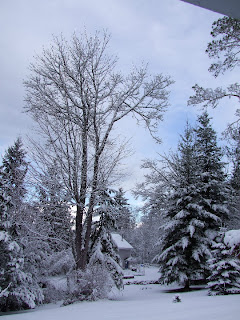 This is sort of what it looks like now - minus the blue sky.  Because, actually, this picture was taken two days ago.  And though we didn't get the huge amounts that Olympia did yesterday, we still got snow.  And we had a head start.  Last night the weathermen said the snow had stopped, but freezing rain was on its way.  NOAA said, 'mostly cloudy'.  Guess what?  Across the sound they are getting freezing rain.  Here?  More snow.  I guess you could say that it is 'mostly cloudy'.  It just happens to be mixed with white flakes.  Sort of like Boo is black, but if you look closely she's 'mostly black' with dandruff.

Since they said the snow had stopped, the Goatmother decided to laboriously shovel out a place for Cabra.  Why, you ask?  Well ... 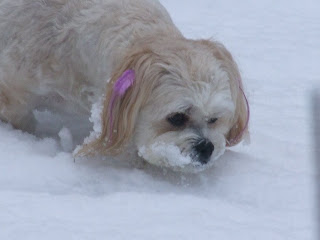 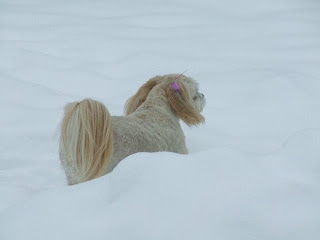 How does one pee in this? 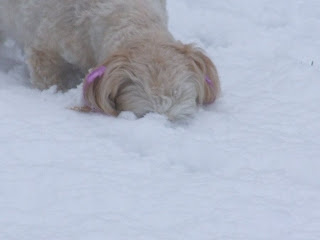 Of course the Mighty Quinn has longer legs and magic hair.  For whatever reason, the snow just doesn't stick to him. 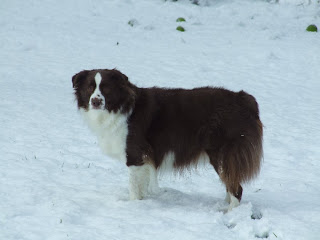 What?!  The snow doesn't stick to me?  All-rightey then! 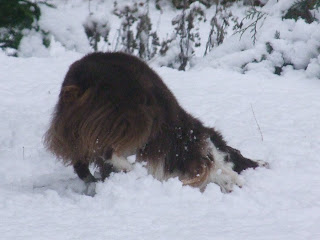 Oyy-kay.  Definitely not on my list of priorities.  So here's the thing, and Thursday's late Words of Wisdom.  No matter how short or tall you are.  No matter how magic your hair, DO NOT go out in the snow.  Never EVER trust it.  After all, who knows where it's been?

Marigold!  Come on out here!  This snow is just so beautiful! 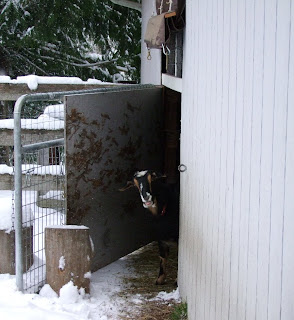 Put a sock in it, Goatmother!
Pondered and Presented by Marigold at 11:07 AM

Oh, and my better half cracked up so loud at your 3-peanuts-to-a-shell treat, I thought we were having an earthquake!

I think Marigold is the smart one. Who knows where the landmines are hidden? And where exactly are those ducks?????

Dear Snowcatcher,
Maybe it was an earthquake. Awfully strange weather we're having. And God knows we can't trust the weathermen. Geologists probably fall in that category as well. I'm just sayin' ...

Dear J,
I can tell you where the ducks are. There were huge prints and the Goatmother thought the b'ar was back. Turned out it was just the ducks trying to walk in the snow. Tricksy ducks.

I'm with you, Dear Marigold! Come out says Goatmother! Put a sock in it! I agree. -grin-

Oh and yes, it must have been Gremlins, messin' with my computer settings. Had to be! No way, could the blame, be mine!!!!!! Noooooo waaaaaaaaaaaaaaaaay.

Remember Dear Marigold, I stuck up for you, so you have to stick up for me. And agree. It could not have been MY fault. -giggles-

Dear Auntie,
I will stick up for you. But it really isn't necessary seeing as how it couldn't possibly be your fault.

I agree! You stay in there where it is nice and dry.

Dear Millie,
You too! Bribe someone if you have to.

Dear GoatGirl,
Exercise is highly overrated. There is obviously no lack of intelligence at Minter Bay.

Have a lovely weekend!
xo

Dear MiMi,
Not even for 1,000 three-to-a-sheller Peanuts!

Beauty is highly overrated. Warmth is MUCH better. Stay in that barn by all means.